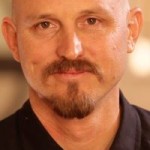 CEO of Not Impossible Lab

Recently honored as one of the Top 50 Most Creative People of 2014 and the 2014 Muhammad Ali Humanitarian of the Year Award, Mick Ebeling is a film/television/commercial producer, philanthropist, technology trailblazer, author, entrepreneur and public speaker. Ebeling is CEO of Not Impossible Labs, an organization that develops creative solutions to address real-world problems.

Not Impossible Labs was founded on Mick’s firm belief that nothing is impossible. With no technical background in ocular recognition technology, Ebeling created Not Impossible’s first project: The Eyewriter. An open source, low-cost, DIY device, The Eyewriter enables individuals with paralysis to create art using only the movement of their eyes. Time Magazine named The Eyewriter one of the “Top 50 Inventions of 2010,” and the device is now part of MoMA’s permanent collection.

Not Impossible followed The EyeWriter with Project Daniel, now celebrating its one-year anniversary. The subject of Intel’s “Look Inside” campaign, Project Daniel enabled Ebeling to fly to Sudan to 3-D-print prosthetic limbs and fit them for children of the war-torn region. He then left the equipment behind with trained locals to continue his work, thus creating the world’s first 3-D printing prosthetic lab and training facility. Arms are printed within hours and cost $100. Time Magazine said, “It’s hard to imagine any other device doing more to make the world a better place.”

Project Daniel earned many awards, including the Titanium Cannes Lion, along with 3 Bronze Lions (Branded Content, Film, & Cyber), and 1 Gold (Product Design). Project Daniel has also won AICP’s Next Cause Marketing Award, the 2014 One Show Gold Pencil (Design and Intellectual Property & Products, tied for “Best in Show”), the 2014 Silver and Bronze Telly Award, and the 2014 Maker Faire Editor’s Choice Blue Ribbon (Creativity, Ingenuity and Innovation), and was among The Nominet Trust 100, and was nominated at the 2015 SXSW Interactive Innovation Awards (Innovative 3-DIY). The work has been entered into the MoMA’s permanent film archives.

On January 6, Ebeling’s first book, Not Impossible: The Art and Joy of Doing What Couldn’t Be Done, hit shelves. The book recounts his life experiences, the Eyewriter, and Project Daniel. Deepak Chopra calls it “the template for a new science of consciousness,” and Jillian Michaels refers to it as, “a road map to changing your life by changing the lives of others.”

Not Impossible’s latest endeavor, Don’s Voice, was released on February 11th, 2015. Don’s Voice is a heart-warming look at the true story of Don and Lorraine Moir. In 1995, Don was diagnosed with ALS. On May 21, 1999, Don was fitted with a ventilator. He hasn’t spoken since. With his communication limited to a letter board, a sheet of paper with the alphabet divided into quadrants, Don’s disease forced him to communicate silently through others for over a decade. The Not Impossible team utilized its know-how to develop a simple interface that replicated Don’s paper letter board. Don is now able to access a new world of technology and communication for the first time since being diagnosed. Through this simple technology, Don independently wrote a love letter to his wife and was able to audibly say, “I Love You, Lorraine” for the first time in 15 years. With over 400 thousand views, Don’s Voice has been featured in GOOD Magazine, Upworthy, and the Huffington Post.